The euphoria at the Bamenda City chemist roundabout in the afternoon of Friday September 22 2017 was easily perceptible. Thousands of people marched, danced, hoisted the Ambazonia flag, paid homage to the flag and prayed, under the watchful eyes of a standby water canon, battle ready policemen and a combat land rover. The police did absolutely nothing. I learnt apparently because Biya Paul had to give a speech at the United Nations General assembly on the day of the generalized demonstrations across Southern Cameroons, the police and armed forces received firm instructions not to open fire or attack and beat up people, arrest and lock them up and in some cases, simply disappear them. That’s their modus operandi in similar cases. The 33 battle ready policemen must have mustered all their powers of control not to react to all the apparent provocation from demonstrators. There are however unconfirmed reports of killings in other parts of Southern Cameroons.

Until about 10.00am, Bamenda central town where I was, was apparently calm. I later learnt this was because hundreds of demonstrators had moved over to the palace of the Fon of Nkwen, hoisted the Ambazonian flag, sang the anthem and started marching from Nkwen through SONAC street and Commercial avenue on their way to the palace of Fon Angwafor iii of Mankon where they repeated the same actions. I joined the demonstrators at the junction of the post office in Sonac Street and moved up to the City chemist roundabout where the police and their lone water canon were stationed. Hundreds of demonstrators and bike riders and in a few cases, cars marched through City chemist. The police allowed the bike riders through Commercial Avenue but stopped cars from going through. When demonstrators noticed the police were not bothered with the freedom songs and Ambazonian flags they freely carried and displayed, they grew in confidence. Their numbers swelled as more people joined them. I did not follow the demonstrators to the Mankon Fon palace because my painful leg did not allow me do that so I stopped around the main market and returned about midday. By then, thousands of people had joined the demonstrations to the Fon’s palace. I returned home only to quickly rush back to City Chemist when the demonstrators returned from the Mankon Fon’s palace and hoisted the Ambazonian blue and white flag in the presence of the combat ready armed policemen and their water canon. 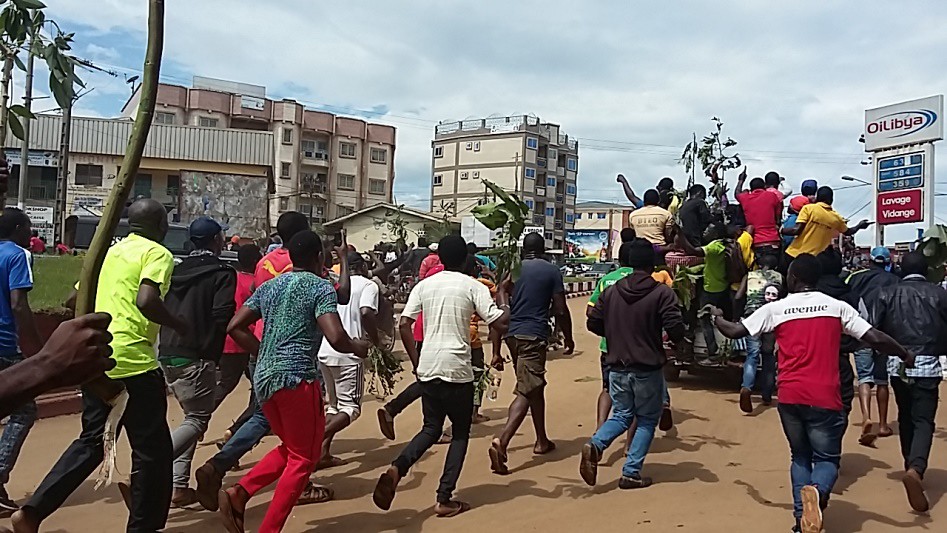 “Enough is enough”, an old man in his late sixties said as he carried a green tree branch and struggled with his tired legs to join the demonstrations. “Takumbeng” women, half-dressed were part of the fanfare at the City chemist. That is when I heard a young man give me the caption for this paper “Bye bye Bonjour, Welcome Good Morning”. This short phrase summarized the euphoria the demonstrators felt as they marched and danced for more than three hours around city chemist roundabout with the police looking on helplessly. 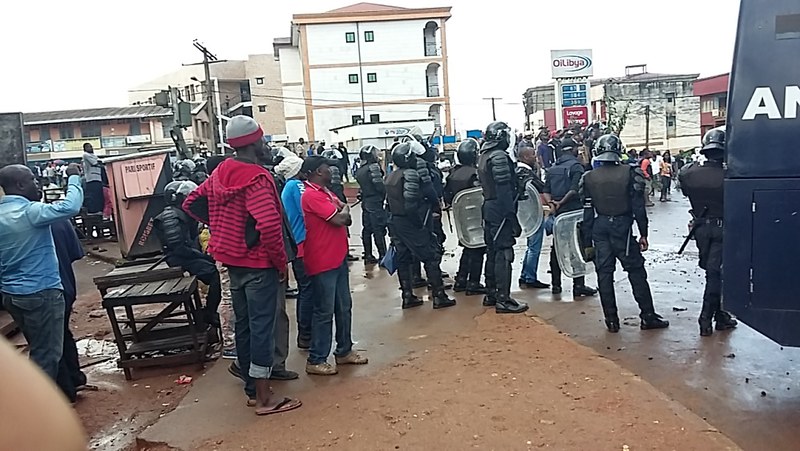 Their hand written placards said it all. They wanted all arrested in the course of the ten months Anglophone crisis released, they asked for the demilitarization of the North West and South West provinces but above all, they wanted freedom. To some, the demonstrations and the inability or refusal of the police to intervene-for whatever reasons, was the demonstration of people power. They wanted their homeland now. They wanted an Ambazonia where they will finally be free. Almost all of them believed that care free demonstrations marked the end of Cameroon as a country as we know it now.

I am a long veteran of marches and demonstrations. I first took part in a demonstration as a student in the University of Yaounde on May 26th 1990. That is when the SDF party was launched in Natrikon Bamenda and in the university of Yaounde. The armed forces beat us back then when we left the university campus promising to march to Unity Palace in Etoudi to ask the occupant to allow multi party democracy in the country. Since then, I have had countless other demonstrations under my belt. Without exception, these demonstrations have always been broken up by the forces of “lawlessness and disorder” as some people now label them. We usually fought back, throwing stones and sometimes trying to fight back at the police. I am just lucky I was never one of the victims because countless people have been killed during demonstrations I have taken part in and others. As I watched an obviously euphoric crowd of demonstrators at the City chemist roundabout, I still kept a wary look out at the police, their gun positions and when possible, at their demeanor. I learnt through hard experience you can never trust an armed police in Cameroon. Many of those demonstrating I am sure, were also watching them carefully. They were emboldened by the fact that the police just watched them warily and did nothing. 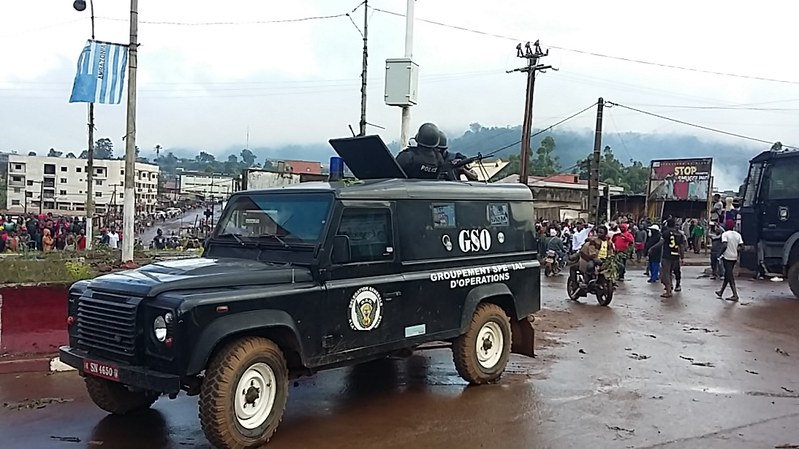 The police attack Landover on standby

I finally left City Chemist around 4.30pm when most of the demonstrators marched over to another police station where they learnt some of their comrades had been arrested and locked up. I didn’t go there so cannot confirm the information. If that really did happen, there must have been extreme provocation considering the 33 armed policemen at City chemist were provoked to shoot countless times and they elected not to do so. For once, that is what the police is supposed to do; watch and allow peaceful demonstrators to do their thing and leave. The police is only supposed to intervene when they are attacked or when demonstrators start destroying property. Neither of that happened on Friday September 22 2017. Should I salute the police at City chemist roundabout? I cannot do that. Some of them have shot, killed and maimed armless civilians demonstrating before and have never faced the long arm of the law. They did not shoot because they could not; they didn’t  shoot to protect the image of their master who was speaking; albeit to a half empty UN General Assembly meeting thousands of miles away from them. How very cynical of them.

Bye bye Bonjour, Welcome Good Morning. Can you beat that? 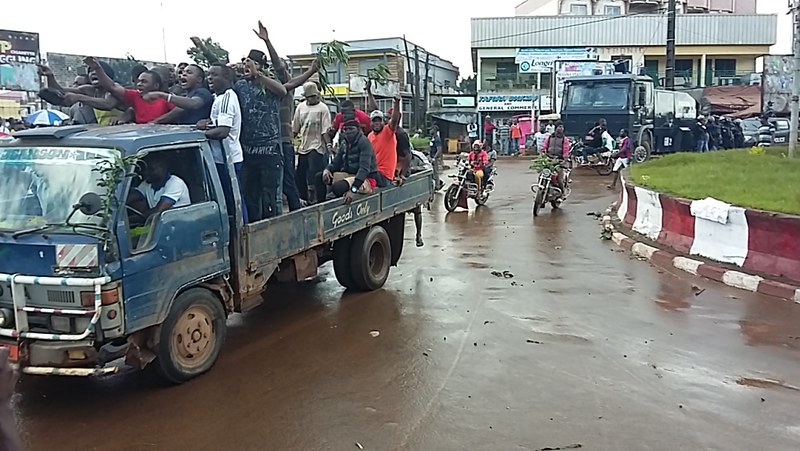 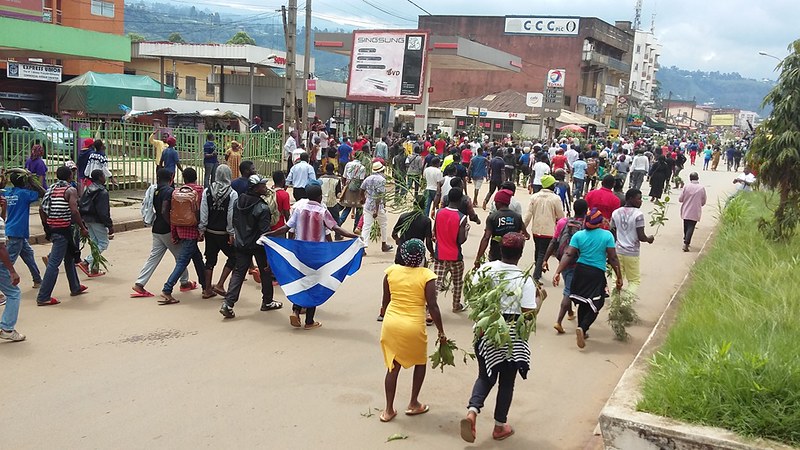 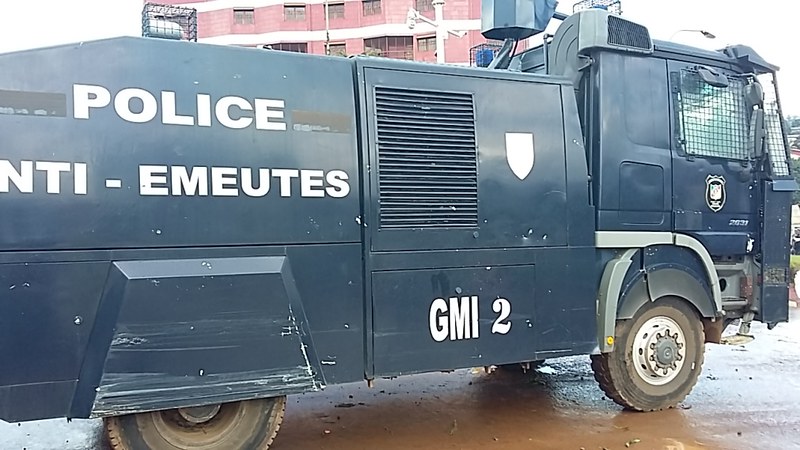 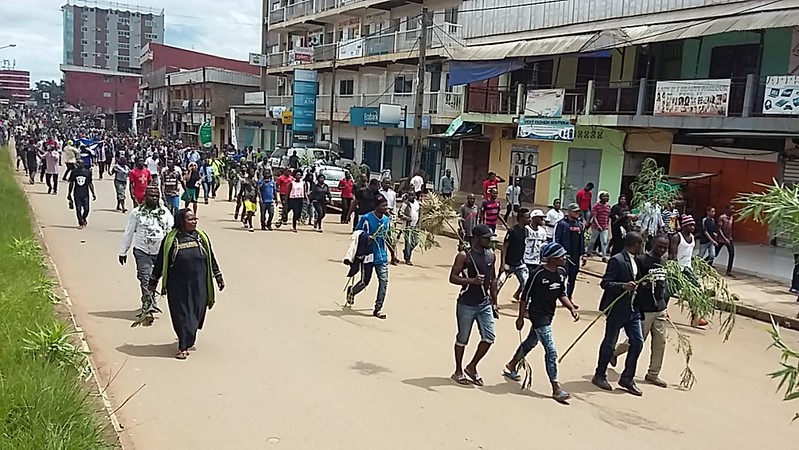 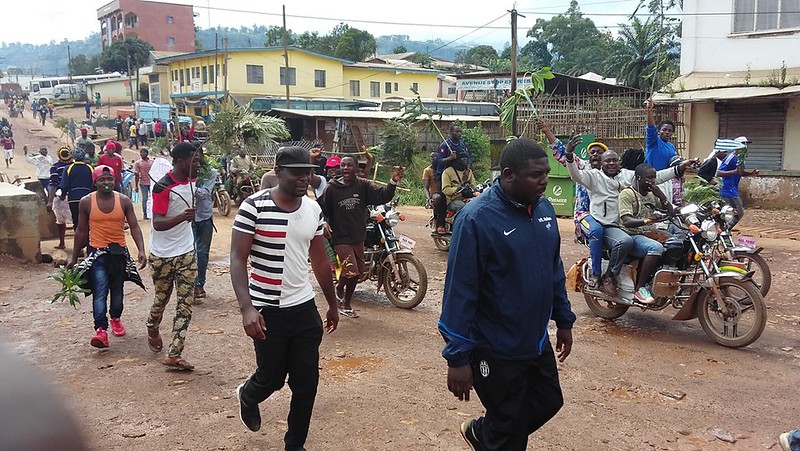