Gambia Pulls out of Commonwealth.

By : admin
Comment: 0
Tag: Gambia Pulls out of Commonwealth.

The Gambian government announced that the former British colony is pulling out of the Commonwealth with immediate effect, saying it would “never be a member of any neo-colonial institution”.

“The general public is hereby informed that the government of the Gambia has left the Commonwealth of Nations with immediate effect,” it said in a statement.

The Commonwealth bloc is a voluntary association of more than 50 countries, many of them former territories of the British empire.

No further details were given but a foreign ministry official, speaking on condition of anonymity, told AFP that the decision came after the government rejected a proposal by the Commonwealth last year to create commissions in Banjul to protect human rights, media rights and fight against corruption.

The proposal followed an April 2012 visit to the Gambia by Commonwealth Secretary General Kamalesh Sharma, during which he met with President Yahya Jammeh and other top government officials.

Jammeh, who is regularly accused of rights abuses, has ruled mainland Africa’s smallest country with an aura of mysticism and an iron fist since seizing power in 1994.

View gallery.”
Flags of the Commonwealth nations are displayed outside the House of Commons in London on March 10,  …

Earlier this year, the Gambia was singled out for its poor rights record in Britain’s annual Human Rights and Democracy report, which cited cases of unlawful detentions, illegal closures of newspapers and radio stations and discrimination against minority groups.

A spokesman at the British Foreign and Commonwealth Office said early Thursday: “We would very much regret Gambia, or any other country, deciding to leave the Commonwealth.”

He noted however that “decisions on Commonwealth membership are a matter for each member government”.

The Gambia is a tiny sliver of land wedged into Senegal. It suffers from widespread poverty but its miles of palm-fringed beaches are a favourite among sun-seeking European tourists

The west African anglophone nation, the smallest on the mainland, has long been dogged by rights concerns under Jammeh’s administration.

Jammeh, who seized power in a 1994 coup, brooks no criticism. He has been re-elected to power three times.

The man who claims he can cure AIDS and other illnesses is often pilloried for rights abuses and the muzzling of journalists. 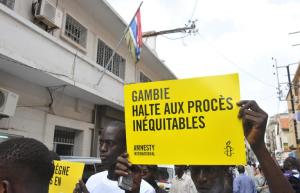 In 2010, the EU, the country’s top aid donor, cancelled 22 million euros ($30 million) in budget support for Banjul because of concerns over human rights and governance.

In August 2012, Jammeh came under attack from Amnesty International and others for sending nine prisoners to the firing squad and promising many more would go the same way.

Many top officials have found themselves charged with treason, often related to coup plots which observers have said are a sign of paranoia by Jammeh, who has woven an aura of mysticism around himself, dressing in billowing white robes and always clutching his Koran.

Last year he warned foreign diplomats that his country would not be “bribed” with aid to accept homosexuality.

“If you are to give us aid for men and men or for women and women to marry, leave it. We don’t need your aid because as far as I am the president of the Gambia, you will never see that happen in this country,” he said.

In January this year Jammeh accused the European Union of trying to destablise Gambia, after the EU set out a 17-point checklist of demands for reforms.

They included calls for Gambia to abolish the death penalty and to re-open newspapers and radio stations closed down by the authorities.

Miss Ghana UK. “The beauty in the soul…shines through the crown”. Janet Djan