The crisis in SOBA UK, the association of Ex Students from St Joseph College in Sasse Buea (Cameroon) resident in the UK has deepened after a “new exco” led by outgoing president Ayuk Akoh Arrey was rejected by a vast majority of Sobans.

Only twenty members of sixty officially registered Sobans bothered to vote for the new executive after an elections boycott call led by Adamu Thomas who on July 23 2016, forwarded a joint protest letter to patrons who are senior Sobans who act as independent advisers and elections monitors in the association. The protest letter called for electoral and constitutional changes before any elections which the outgoing executive had conveniently refused to call after their two year mandate expired in March 2016.

The Monday August 28 2017 statement rejected the new executive of Soba UK announced a day earlier and endorsed by more than sixty sobans stated inter alia “…we do not recognise the individuals who have been named to positions of responsibility having been elected through a flawed elections process. They do not represent us and therefore, do not act in our interest or our behalf”. The new executive that was rejected includes Ayuk Akoh Arey as President, Bime Lafon is Vice president, John Bawak is Secretary, with UsamatuÂ  Babaginda as his vice, Batey Tako is Financial secretary , Denis Ngafor is his vice and Franklin Egbe is treasurer. All the above candidates had no opponents after a large majority of Sobans boycotted the elections. It should be noted during his main 2014 elections presidential campaign speech, Ayuk Akoh Arrey promised to run for one term only, a promise he reneged on subsequently. 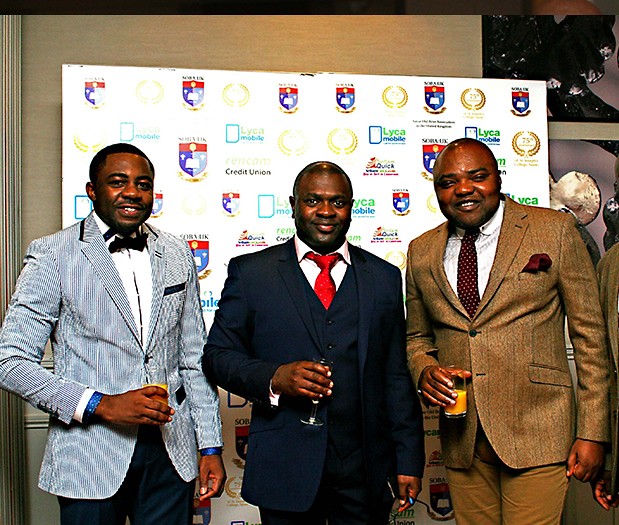 Relaxed Mood at SOBA Convention. Ayuk Akoh Arrey is in the middle

The Soban group that rejected the elections has called for them to be cancelled forthwith and patrons Dr Aloysius Mbako and Mr Sako Burnley re-instated in their roles as elections moderators. They were side-lined when the outgoing executive realised they might not support their electoral coup. They also recommended Akoh Arrey and his team call an extraordinary assembly meeting by September 4th or the disgruntled “Soban fraternity” in the UK will summon an extraordinary AGM on October 7 2017 to help resolve the problems plaguing the association. The unity extraordinary meeting will need to be moderated by patrons, the statement added.

Not surprisingly, the new executive which has since described the protesters as a “small band of rascals” rejected all calls to reason choosing to threaten legal action that the “troublemakers” used a logo they designed. One of their supporters of the disputed exco described a member of the opposing team as a “social clown”. Both sides are maintaining their stance as they try to mobilise others to their action plans.

Created some twenty three years ago, Soba UK has been managed initially by patron Sako Burnley but since Shupo Francis and Ayuk Akoh Arrey took over management more than fifteen years ago, they have resolutely controlled Soba UK affairs like a family affair ruthlessly ignoring anyone who tries to oppose them. SOBA UK is now the only external branch not recognised by the Soba mother branch in Cameroon after a series of ego classes between the contested Â executive and Soban officials in Cameroon. Only Shupo Francis and Ayuk Akoh Arrey apparently have the “steel and agility” to run Soba UK, a hegemony most members now think should stop.